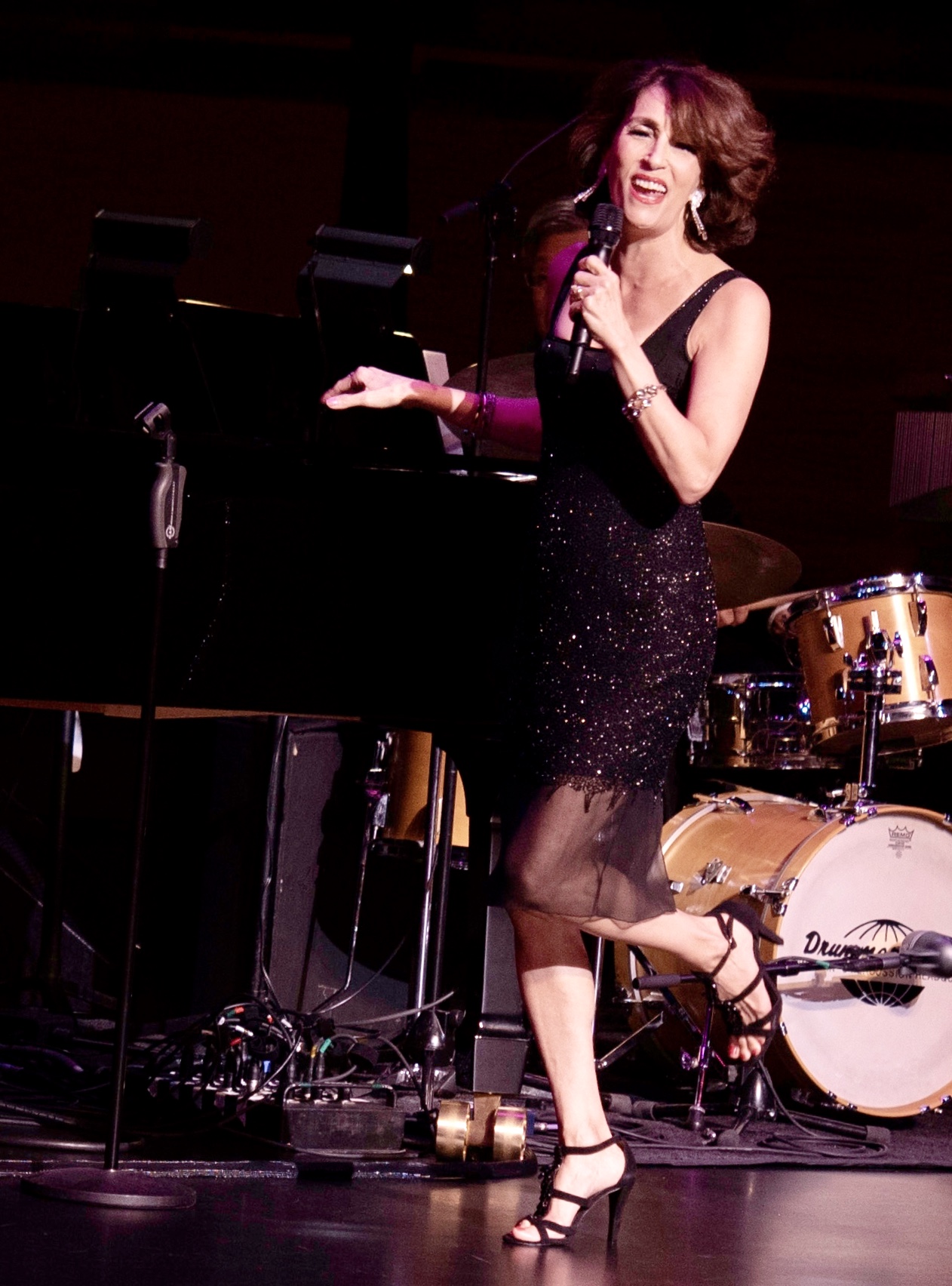 Barbara Fasano, whose fourth CD BUSY BEING FREE (MAC Award ~ Major Recording of the Year) was released to critical acclaim ("My favorite new vocal album" -- Will Friedwald, WSJ) has been hailed as one of the nation’s most stunning and soulful singers. A Resident Artist at New York's legendary Birdland Jazz Club, her recent highlights include headlining at the Saratoga Jazz Festival with her trio. For a fun live video clip, GO HERE.  In 2019 & 2021 she headlined at Music Mountain's Jazz series. For a rather surprising answer to the FAQ "How does a NYC singer prepare for a concert in the mountains?" GO HERE.  Other highlights include multiple sold-out engagements at Birdland Theater, London's Pizza Express, & headlining at both Carnegie Hall & Lincoln Center.

During the COVID crisis, times are tough for all of us, including performers.  Like so many of her colleagues, Barbara is sending out the music from home.  For her series of #72andsong, GO HERE.

Frank Scheck of The New York Post proclaims, "Fasano is a gorgeous, soulful singer who has an actor’s intensity in whatever she sings." Radio host and critic Ron Forman puts Fasano in "the top tier of today's jazz vocalists."  Whether singing a song by Joni Mitchell or Harold Arlen or Cole Porter, Fasano takes her audience on a spellbinding, emotional musical journey. Her performances and recordings have won her seven MAC awards, three New York Bistro awards, and a New York Nightlife award. Her last CDs, "Busy Being Free" and "Written In The Stars" both won MAC Awards for Record of the Year. Barbara and her frequent musical partner Eric Comstock are four-time winners of the Manhattan Association of Cabarets and Clubs  MAC Award for Major Duo Artists of the Year.  Fasano & Comstock are the 2021 recipients of the Donald F. Smith award, presented by the Mabel Mercer foundation, acknowledging their "immeasurable contributions to the international world of cabaret ... and achieving a rank as preeminent jazz stylists." “Mr. Comstock and Ms. Fasano are turning the neighborhood into a hotbed of pleasure,” raves The New York Times.

Fasano is a regular performer at New York’s most prestigious clubs and is a Resident Artist at Birdland Jazz Club where she performs most Saturday evenings, together with Eric Comstock & Sean Smith .  With Eric Comstock, she was among the last singers to headline at the Algonquin’s legendary Oak Room supper club, with their show “HELLUVA TOWN: A New York Soundtrack”, which enjoyed an acclaimed and sold-out run and continues to tour the country. The New York Times’ Stephen Holden called it “exhilarating”, singling out Fasano as a “lyrically sensitive interpreter with a special affinity for Joni Mitchell” and comparing her to another of her idols, Lena Horne -- further proof of the breadth of Fasano's artistry. Their show "Shoulder Season" won unanimous raves,  & together they were again awarded the MAC Award for Major Duo Artists, as well as receiving a Broadway World nomination for Duo Show of the Year.  Their concert  "DOWNTON ABBEY ROAD: The Best of Britain", a celebration of  "American" standards that were penned across the pond, opened at Birdland Jazz Club in New York,  completed a run at the Kravis Center in Palm Beach, and has toured Provincetown, Baltimore, Binghamton, East Hampton, & headlined at the Gaslight Festival in St. Louis. Fasano & Comstock headlined in London at Pizza Express, Live at The Pheasantry, bringing "DOWNTON ABBEY ROAD"  to its exciting origins and playing to sold-out houses.

Fasano’s voice reaches deep into the soul of humanity. “She illuminates with torchlight,”according to David Finkle of The Huffington Post. “The slim, raven-haired Fasano continually allows feelings to simmer and crackle, singing Cole Porter's ‘In the Still of the Night’ as well or better than anyone has ever sung it.” In commenting on songs that run the gamut from Dorothy Fields and Jerome to Kern to Bruce Springsteen, Michael Miyazaki of Cabaret Scenes Magazines declares, "Fasano presented a master class in how to make a song a three-act play in 'Remind Me', veering from temptation to love to heartbreak to wisdom in the course of three minutes. Her "Thunder Road" is a masterpiece." Rex Reed of The New York Observer notes, "She gives off palpable electricity", and NEXT’s David Hurst raves, “Fasano is nothing short of a revelation, with the poise and jazz chops to go with her beauty to create a formidable singer.” Theatermania’s Brian Scott Lipton simply states, “Fasano, who sounds better than ever, once again proves herself to be a remarkably expressive singer.”

Wall Street Journal jazz critic Will Friedwald calls Barbara “a charismatic stylist who effectively channels the spirits of the great über-divas Lena Horne and Barbra Streisand” in his book The Biographical Guide to the Great Jazz and Pop Singers. On her CD, “Written In The Stars”, a Harold Arlen collection, she surrounds herself with an A-list jazz ensemble, including John di Martino on piano. The CD has garnered praise in publications as diverse as JazzTimes and Playbill, and receives radio play around the world. The New Republic’s David Hajdu raves, “With this record, Barbara Fasano proves that she is not just a great Italian crooner, an heir to Sinatra for our time, but a jazz singer of the first rank.” Barbara’s previous CD, “The Girls of Summer”, co-produced by pianist/arranger Rick Jensen, is an eclectic mix ranging from Springsteen to Sondheim, and based on her one-woman show of the same title. Both of these CDs were named Record of the Year by the Manhattan Association of Cabarets and New York Bistro awards, and her work as a live performer has twice earned her awards for Female Vocalist of the Year.

Barbara is a native New Yorker, who grew up in a spirited Italian Catholic household – excellent preparation for a life in show business! From her early childhood, music and stories were a way of life. Her mother made the Sunday lasagna while listening to Italian American singers like Jerry Vale on the radio. Her father listened to Louis Armstrong, Ella Fitzgerald and Bing Crosby and sang along in a joyful baritone, teaching Barbara many of his favorite songs. From the early Streisand albums, she learned the music of her favorite composer, Harold Arlen, and as a teenager learned to play the guitar, memorizing recordings by Paul Simon, Joni Mitchell and other singer-songwriters. Combine all this with her grandparents’ stories of Neapolitan singers and vaudeville and you see how her musical identity was forged. Within her eclectic choices, what remains consistent is her ability to invest a lyric with deep emotional truth, creating virtual one-act plays out of each song.

She earned a degree in theatre, has worked as an actress across the country, and is the recipient of Hofstra University's Estabrook Alumni Achievement Award. Barbara's work as a teacher in New York and around the country includes directing, private coaching, workshops and master classes in the art of performance and song interpretation. Together with Eric Comstock, their workshop, SING THE TRUTH, has enriched the lives and music of hundreds of vocalists. In addition to classes in New York, they conduct master classes with the Musical Theatre department at University of Michigan.  They have been guest master teachers with the St. Louis Cabaret Conference and the Michael Feinstein Songbook Initiative in Los Angeles, coaching and judging gifted high school students.  Recently they taught the American Songbook to acting students at Sanford Meisner's legendary acting conservatory, the Neighborhood Playhouse.  To read more about Barbara's teaching, & connect with her for coaching,  GO HERE.

In the words of revered jazz critic Ira Gitler, she “has it all, and then some … artistic, swinging, and superbly entertaining.”
Photo credit: Helane Blumfield